Batten Show Jo Tai (ばってん少女隊) is a five-pieces idol girl group formed and managed by Stardust Promotion in 2015. The group is a part of STARDUST PLANET and primarily active in Kyūshū region, Western Japan.

In September 2014, Stardust Promotion Fukuoka Office formed a lesson group consisted of seven members under the name F-girls. The group performed in various events, including the opening act of Momoiro Clover Z's Onna Matsuri 2014 Fukuoka live viewing in November 2014. The group was also participated as performer in Momoclo Dontaku held at Fukuoka Dome in April 2015.

In March 2016, the group was chosen as the Tourism Ambassador of Munakata City (宗像市観光大使). They also had their major debut under Colourful Records, a sub-label of JVC Kenwood Victor Entertainment, Inc. in April, with the single Osshoi! (おっしょい！). In the same year, the group had an opportunity to perform the ending theme song of Dragon Ball Super. The song was released as their second single, Yoka Yoka Dance (よかよかダンス).

Batten Show Jo Tai released their third single, Special Day (すぺしゃるでい) in February 2017. Their first album titled Must-Buy (ますとばい) went on sale in June. MEGGRY GO ROUND served as their fourth single, released in December 2017. The song is written by a Japanese band Frederic, who also wrote the Side-B song from the previous single.

In May 2018, the group released their fifth single, Muteki no Venus (無敵のビーナス), written by Kazuki Sakai of Japanese band flumpool. The group experienced their first one-man featuring a live band in May 2018 in Tokyo. They released their sixth single, BDM in November.

The group held a tour at four Zepp live houses around Japan with a ska-punk band MAYSON's PARTY from March 15 until March 30. Their second album, BGM, was released under Colourful Records as their final release with the label. In July 12, Kiina Haruno announced that she would take a break from the group activities to prepare herself for university entrance exam, effective from September. They performed in NUMBER SHOT 2019, the biggest outdoor music festival in Fukuoka on July 21. The group held another tour without Haruno under the title Batten Show Jo Tai no, Inaka Musume 5th ~FORCES~ from September 22 until November 24.

In March 26, Haruno announced that she would restart her activity as a part of Batten Show Jo Tai started from April. On the other hand, Nishigaki announced that she would withdraw from the group in the end of April. Due to COVID-19 pandemic, their last live as six-pieces group was recorded and streamed for a limited time period on their newly opened Youtube channel. Starting from May, the group restarted their activities as a five-pieces idol group. A private label named BATTEN Records was established to serve as the group's label. One year after their latest release, it was announced that five digital singles would be released every week started from June 21. Also celebrating their 5th anniversary, the group held an online concert with no audience on June 21. The group announced that they will release a new album around Fall 2020.

The word batten (ばってん) comes from a word used in Kyūshū dialect, meaning "but". Their nickname, basshō can also be heard as "but show" in Japanese accent. The words "but show" is currently used for their official website address under but-show.com. 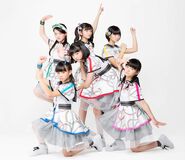 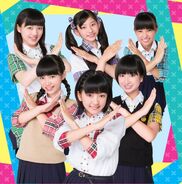