The Momoiro Clover Z Wiki is a collaborative encyclopedia for everything related to the energetic idol group Momoiro Clover Z: songs, concerts, sister groups, and more. There are 360 articles and growing since the wiki was founded in 2012. The wiki format allows anyone to create or edit any article, so we can all work together to create a comprehensive database for Momoiro Clover Z.

This wiki is still at its beginning, and we need your help expanding and adding articles to the wiki! We have a whole host of things to do, so we really hope that you join us! You can also find out more here. If you want to write a new article, just enter the article title in the box below.

Mirai Bowl / Chai Maxx (ミライボウル / Chai Maxx) is the 3rd single of Momoiro Clover. It was released on March 9, 2011 under Starchild Records. Mirai Bowl is used as the ending song for anime Dragon Crisis! Mirai Bowl is composed by Kenichi Maeyamada, co-composed by Tomotaka Osumi and arranged by NARASAKI. There are four different melodies mingled in this song. The song starts out with Charleston swing, jumped into compound meters in the chorus, switched into techno style in the rap part before went into solo part of Kanako Momota. (more..) 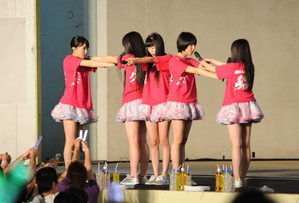 Retrieved from "https://momoirocloverz.fandom.com/wiki/Momoiro_Clover_Z_Wiki?oldid=11197"
Community content is available under CC-BY-SA unless otherwise noted.