Shiritsu Ebisu Chuugaku (私立恵比寿中学, abbreviated Ebichu (エビ中)) is an idol girl group represented by Stardust Promotion under Entertainment Section 3's 3Bjunior. The group was formed in 2009, with the concept of a group of middle school students and was advertised as being a group with very rough singing and dancing skills. The group is nicknamed King of Gakugeeeekai (King of 学芸会, King of School Play).

Shiritsu Ebisu Chugaku is named after a fictitious school in Ebisu, a neighbourhood in Shibuya, Tokyo. It was planned as a group of elementary and middle school students. The band was officially nicknamed "King of School Play", and its concept was advertised as being a group with very rough singing and dancing skills. Or, more accurately, the band's slogan was "Unarticulated dance and shaky vocals." Ebichu was formed as a quintet on August 4, 2009. Since then the lineup changed several times, with some members having "changed school" (the group's official term for leaving it) and some having "transferred in" (joined).

In June 2011, it was announced that Ebichu was to hold its first solo concert, on October 8 at Shibuya O-East. Parts of it were released on the band's first solo live DVD, which appeared on February 15 of the next year. In total, in October Shiritsu Ebisu Chuugaku gave three sold-out performances.

As of March 2012, there were nine members and the only two original members who still remained in the group were Rika Mayama and Mizuki. Although in April 2012 they both entered high school, it was decided that they would remain in the group. They started joking that they were middle school students forever.

After six self-published "indie" singles on the talent agency's recording label, the latest few of which charted on Oricon, the group signed a temporary contract with the major label Defstar Records to release a single titled, incidentally, Karikeiyaku no Cinderella ("Temporary Contract Cinderella"). The release date had already been determined as May 5, 2012, the Children's Day. The contract signing was made into a ceremony, which was held on March 4 in the presence of a large audience of fans. The single Karikeiyaku no Cinderella debuted at number 7 in the Oricon daily ranking for May 1. Having peaked in the daily chart at second position, it also debuted at number 7 in the Oricon Weekly Singles Chart.

On July 1, 2012, Ebichu held a three and a half hour solo concert at Nippon Seinenkan, their first solo concert at the venue. The show was called "Jā Best Ten" and featured an imaginary ranking of the band's songs, counted down in the style of 1980s TV shows. It also included the first public performance of the song Go! Go! Here We Go! Rock Lee, a closing theme of the anime Naruto SD, to be released as the group's second single in August.

The girls declared that they were aiming for third place in the Oricon chart with their third single, titled Ume, which was released on January 13. The goal was achieved — the single actually placed 3rd in the weekly chart.

On June 24, the first full length album Chunin was released, containing 14 songs: the four major singles with thier b-sides, a cover of Yellow Magic Orchestra's Taisou and 6 new songs including 2 interludes. It peaked at number 7 on the Oricon weekly chart.

In December 2013 it was announced that 3 members, Mizuki, Natsu Anno and Hirono Suzuki, would leave the group at a concert that would be held on April 15, 2014, at the Nippon Budokan. After leaving, they will study to enter universities and get trained to be actresses. It was also said that one of the three, Anno, would study abroad and would not return to Japan for a long time.

During the 3Bjunior LIVE FINAL: Ore no Fujii 2014 on January 4, it was announced that Kaho Kobayashi and Riko Nakayama of the unit Team Daioh Ika would be transfered to the group, starting a new system with 8 members after the graduation of Mizuki, Natsu Anno and Hirono Suzuki. They started activities in the "Shiritsu Ebisu Chuugaku Luck To The Future PART2" perfomance on March 21.

Later that month a new tour called "Shiritsu Ebisu Chūgaku Spring Sony Music Labels Rookie Tour 2014 ～Umarekawari Chou Chou Bone to Etcetera～" started, this was the first tour with the new system of 8 members. It was held from April 27 to June 15, during this tour the single Butterfly Effect was released.

In the middle of December 2015 it was announced that Hinata Kashiwagi had been diagnosed with sudden deafness and that the release of the group's third album, scheduled for release on 10 February 2016, had been postponed for an indefinite period of time. The album, titled Anarchy, was finally released on April 20.

On February 8, 2017, member Rina Matsuno died, aged 18. Matsuno was unable to perform at the group's concert the day before due to a health issue and was taking medical treatment at home in Tokyo. In the early morning on February 8 her condition suddenly worsened. At around 5 AM her parents called 119. She was taken in the ambulance, but pronounced dead at the hospital. It is presumed that she died from an illness. In her last post on Instagram on February 6 she said that she had returned from a family trip to Hakone.

The group's website continued listing Rina Matsuno as a member until April 1. Then it was reported that the group will continue with the remaining 7 members and will release a new album, titled Ebicracy, on May 31. In August 31 2017, Aika Hirota announced that she will be withdrawing from the group in January 2018.

On November 8, they released their 11th single titled SING-A-LONG SING-A-SONG, it was the first single after a year and 2 months, also the first and only single with 7 members as well as the last single for Aika Hirota.

On January 2018, Ebichu skipped it's Christmas Daigakugeikai in favor of Aika Hirota's graduation concert in January 3 titled ~forever aiai~. On January 3, Aika Hirota performed her last concert in Nippon Budokan along with the other members. She officially bow out after the concert. It was Ebichu's last performance as a 7 member line up. Ebichu decided to continue it's activity as a 6 member line up and had their first performance the day after Aika Hirota's graduation titled ~Ebichu Pride~.

On May 1, Ebichu had their very first match with Momoiro Clover Z in various games streamed live in preparation for Stardust Planet Natsu S concert. They would have rematches again in June 6 and July 9.

On June 6, they released their 12th single titled 'Dekadonden' where they collaborated with Naomi Watanabe for the MV. This was the first single with 6 members and the first without Aika Hirota since Asa no Chime ga Narimashita! in 2010.

Ebichu held a three day Christmas Daigakugekkai concert on December. Mirei Hoshina was not able to perform on the 2nd and 3rd day due to a head injury she sustained during rehearsal. During the concert, Ebichu announced they would be releasing their 5th album on 13 March, 2019. A surprising announcement was also made where they will be releasing their 6th album in Autumn.

On January 2019, Ebichu and Negicco held a three day joint concert titled [EbiNegi#2], [EbiNegi#3] and [EbiNegi the Final]. On March 13, Ebichu released their 5th album titled MUSiC. It ranked 2nd on Oricon album chart on the day of release. On April 16, a special collaboration event with the music website, Natalie was held to celebrate Ebichu's 10 year anniversary since its conception. 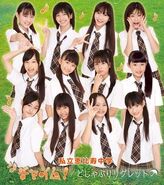